Romacio Fulcher is a well-respected international leader, trainer, coach, and much sought-after mentor. He is a highly successful entrepreneur with 750,000 people globally in his network and has accomplished over $1 Billion in Sales. He tried the traditional college path and quickly found that it wasn’t for him. Instead, he began as a cold caller, getting leads for a mortgage company. Under the owner’s mentorship, he mastered the business, ultimately going on to start his own mortgage and real estate company to become a self-made millionaire by the age of 25. He was introduced to his MLM mentor and the industry of network marketing about ten years ago. He applied what he learned once again to become a top leader and earner. Although Romacio has earned millions of dollars, his heart is in training and inspiring others to transform their lives by helping others earn supplemental income along the way.Most recently Romacio was one of the founding members of a previous company where he led the charge in doing over 30 million dollars in sales in 5 months!Below is his recent 1st month results:

December 31, 2019 Romacio resigned from this company and now here is what’s coming soon!

We are a global digital business! A total lifestyle enhancement company. A global private membership that enhances every area of your life.We know everyone wants a better lifestyle therefore we will be providing this membership through a monthly subscription model.

In 2018, over 120 million people joined a network marketing company with over $189 billion in total combined revenue. The problem is that 73% of those people, that is over 87 million people, did not make any money at all. The reason for this is that although people are looking and wanting to make more money, they hate recruiting and they hate sales.  The opportunity is to create a business for the 73% of those people in which we provide a digital, global platform that educates people on how to make money without recruiting.

Success, for some people, represents the fulfillment of certain predetermined aspirations. For some, it's achieving a certain lifestyle, a level of status, or a comfortable income.

While all of these are worthy goals, their accomplishment leaves many who achieve them wondering, "what's next?"

Limitless Success inspires you to reach this rare frontier where you realize that true success is so much more than merely passing a certain milestone or teaching a single fixed goal. Limitless Success is about living a life of not only profit but also of passion, purpose, and impact. Living at this rarefied altitude delivers life experiences that can only be described in one word. Meaningful.

Peer into the hearts of these purpose-driven leaders who have lost, survived, and ultimately learned how to THRIVE!

Romacio was born and raised in Oakland, California.  The son of an entrepreneur, Romacio learned early that with hard work and dedication, any and all things were possible.  In his teen years he joined his first company and quickly became the top producer in his region.  He then went on to college with a golf scholarship, but quickly realized his purpose lie elsewhere.  He happened upon the mortgage and real estate industry where he ran his own successful business and became a millionaire before the age of 25.  As the real estate industry began to collapse, Romacio was introduced by a friend, to the Network Marketing industry, where over the past 12 years he has been refining his craft, teaching others to become successful and is now a well regarded powerhouse and ambassador of the MLM industry.  Romacio has earned millions of dollars, many times over in this industry and has recently received Eric Worre’s prestigious “Million Dollar Earner Hall of Fame Award” and continues to build massively successful teams, shattering records along the way.read more

After leading a team of over 100,000 members globally, and a remarkable achievement of $103 Million in sales in 13 months, Romacio left his previous company, in October of 2018, for an opportunity to play a key role in launching Onyx Lifestyle in July of 2019. With very specific goals in mind, Romacio brought in $10 Million in sales and earned $169,893 in commissions his first month with Onyx and went on to generate $30 Million in Sales in the next 5 months, before resigning from the company in December of 2019.

Affectionately known as the “California Kid”, Romacio has always said…

When you discover your gift, it's your responsibility to share it loud and proud, networking gives us that platform to share our gifts with others. As a kid I was always a huge giver and never understood why so many people loved to take from others. As I became a man, I later understood that every person sees the world in a different way and oddly enough the way you see the world will be a direct reflection of how you treat people in the world.read more

My first month commissions is only a reflection of my inner desire to truly help people make their lives better, the more you give the more you earn — I love to give, it's just the way I live!

Featured in the September 7, 2020 issue of a new International Italian/English Magazine.

Mentorship is wisdom without waiting

At the root of all success is determination 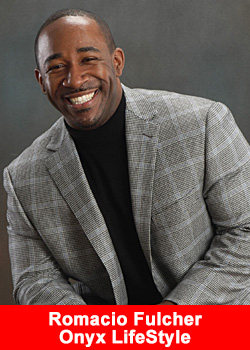 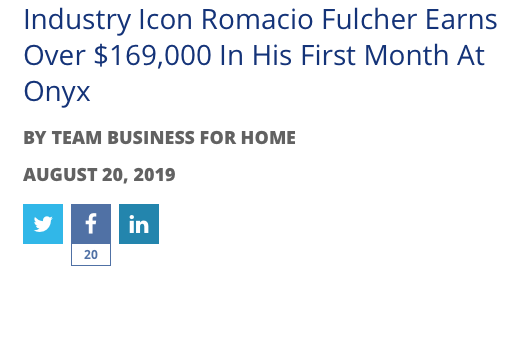 Romacio Fulcher, affectionately known as the “California Kid”, returns and once again explodes onto the Network Marketing scene. On July 8th, 2019, Romacio joined and launched his Onyx Lifestyle business.

In true form, he earned over $169,000 dollars of personal income and achieved the rank of Crown Ambassador in his first thirty days.*

A Crown Ambassador produces over $750,000 in sales volume in a 4-week period.

INCOME DISCLOSURE NOTICE:  Practicality dictates that everyone’s results will vary as we are all unique and different. Basically, it takes hard work to make a substantial income in this business. Some people will make no money at all. The earnings of an Onyx Lifestyle partner will be 100% dependent upon their skills, work effort, commitment, leadership capabilities, and market conditions. Common sense would suggest that in most opportunities, one would find exceptional individuals doing well above average, while others perform under the average. Onyx Lifestyle does not guarantee any level of income or your success.

do you want to be the first

Fill in your information below, let us know what interested you the most and the best way to stay in touch and we will be sure to get back to you, with all the exciting details!

Your information is safe with us, we are the sole owners of what is collected on this site and only have access to that which you voluntarily give us via email or other direct contact from you. We will not sell or rent this information to anyone.